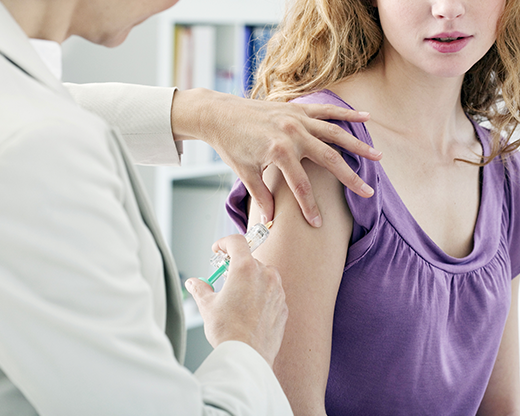 Human papillomavirus (HPV) vaccine
(human papillomavirus)
Cervical cancer is the second leading cause of death of women around the world. After Taiwan's government promoted the screening test of cervical smear, the incidence of cervical cancer has dropped from 10 to 15 per 100,000, and the mortality rate of cervical cancer dropped from 3 to 5 per 100,000 in Taiwan, which were the 6th highest incidence and 7th highest mortality rate of female cancers in Taiwan. Pap smears plus with "human papillomavirus vaccine" (also commonly known as "cervical cancer vaccine") can prevent cervical cancer more actively and effectively.
BACK
SHARE
1.Human Papillomavirus 9-valent Vaccine "Gardasil 9" developed by Merck Pharmaceuticals: it approved in Taiwan by Taiwan's Food and Drug Administration at 2016, which was the second fastest country to approve the vaccine after Hong Kong. Our clinic introduced the service as soon as the vaccine had been approved, due to it can prevent more types of HPV to cover all the common types of HPV in Taiwan, and the prevention rate is up to 90%.

3.Human Papillomavirus 2-valent Vaccine "Cervarix" developed by GlaxoSmithKline Pharmaceuticals is a recombinant vaccine only focusing on HPV 16 and 18, and is able to prevent the cancers and diseases induced by the two types of HPV just as Gardasil. It can not prevent benign genital warts, cauliflower and so on, but has more cross-protection to against the HPV 45, 31 and 52.